Here’s your annual spring update on the route… And some pretty maps of the entire landmass! You can click on them if you want a better look: 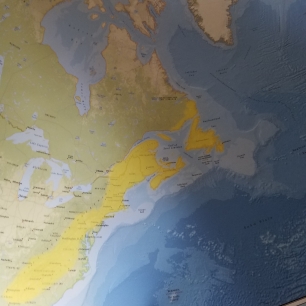 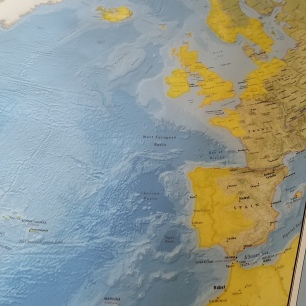 Alright. Here we are, in the west of our relevant area. If you’d like a better look at the territories, go to the Mission page on the IAT website, and you’ll get a good idea of the land our brilliant geologists have estimated was part of the Appalachian-Caledonian orogeny (“Orogeny” – fancy geologist term for “specific millions-of-years-long time during which all these particular landmasses were crashing together and making mountains”).

As of this March, my stopped point is on the Appalachian Trail, a few hundred miles north of the center point in the good US of A. Give about a week and a half, and we’ll be back on, presumably trekking north with some of the 2018 flip-floppers who are doing their northern hike first. (These are grand folks who decide to hike the full Appalachian Trail by choosing a midpoint, doing half the trail, and then transporting across states and doing the other half. [Instead of hiking straight from Georgia to Maine, or vice versa.]) I’ve been stalking their online sign-up sheets, and it’s looking like we might have friends on the trails, kids.

Not like Pennsylvania in December, amirite? amirite? Hum. Balto and The Nameless One were the last SOBOs I knew of on the trails; we crossed paths two days before I got off. No clue if anyone was further north. (I followed a dude called Omega for weeks. He also got off in Duncannon, a few days before I did. Interesting human being.) Back to maps.

Once we reach Mt. Katahdin, we continue (generally) northeast from the summit until we cross over into New Brunswick, Canada. You can access a quick pdf here, or go wander around the IAT Maine website for details on the Maine section.

Thence to Canada! I’m sending my passport off to be renewed. Hopefully this shall be sufficient for them to let me into their boundaries. Glorious Canada. Mooses and snow and Canadians and who knows what else. I have never been to Canada, except for once when I flew through the airport and my flight was delayed and I stayed in a hotel which the airline covered and they gave me more breakfast than they should have because I looked pitiful and compelling. Presumably this shall be far better.

Canada is where things start getting a little weird. So far we’ve been hiking point-to-point, and we will for the majority of North America. There’s just this one little blip at the tip of the Gaspé peninsula, where the trail ends, and I have to drop back down to get onto Prince Edward Island. That drop is the only part that might be strange, because transportation is sparse between Cape Gaspé and Matapedia. The train line you see between the two, in the map above, doesn’t run anymore (though there’s apparently a bus at certain times).

Anyways – so we somehow get to Prince Edward Island, in Borden-Carleton, and then hike across to Nova Scotia, after which we’ll take a ferry north (ye olde dotted line in the top right corner) and land ourselves on the Newfoundland/Labrador section of the IAT, which is the last portion of our trail in North America. It ends at L’Ance aux Meadows, which is the site of the first known Norse settlement on our continent (discovered in the 1960s).

Timeline: TBD.  Expect it to be a while. Too much party, all trees everywhere. Such enjoy; and there ya have it. North America. Any more would be excessive.

For those of you who like maps, here are pictures of the current trails in Iceland and Greenland:

That’ll be all you know, folks, for the next while. France is working on their trails. Denmark, Germany, Norway, and the Netherlands all have coastal trails established; Ireland, Scotland, Wales, and GB are set, as well as Portugal and Spain. Working on contacting the folks in Morocco, which runs on a guide service, because why the heck not.

Cotton Joe’s done a good number of the trails already. As far as I know he’s the only one who’s done a lot of the European trails, but I’d love to hear from anyone else who’s done sections in Canada and/or across the seas, and pick your brains for clues. Y’all are the best.

Thanks to Don Hudson and Richard Anderson for making this possible. Mountains and seas and glaciers and forests. Incredible stuff.