Wow. Wow it’s been a while. It’s been even longer than I thought it would be.

But it’s around the time of year that students start emerging from their confinement (like vampires. We’ve all been there)… So I hiked through the rest of Pennsylvania, through New Jersey which was beautiful and swampy, and almost through New York. Pictchas latah, I promise. And maybe more stories. But right now, I’m headed off to the Dakotas to go see some of my former students graduate, as promised when I abandoned them last year to go live in the woods like a responsible adult and a horrifying role model. I am so happy.

This is the last time I’ve got scheduled to get off the trails. I don’t actually know what I mean when I say that to y’all… But we’ve got several months of traipsing through the woods to think about it. 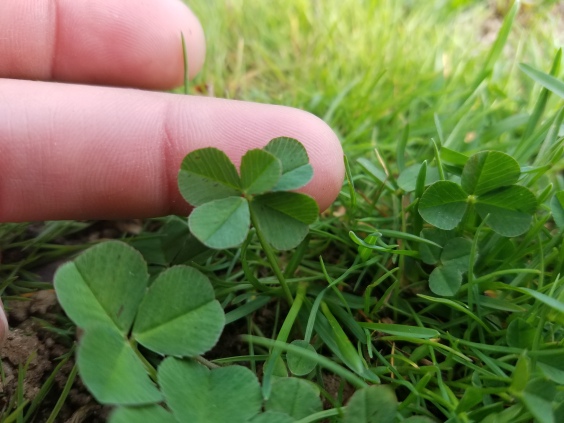 Pretty sure that if you find a five-leaf clover, you never have to look for four-leaf clovers again.

*I won’t tell you if I was in the middle of the woods or not when I heard it.

It was an interview with a poet named Naomi Shihab Nye, who is perhaps best known for this poem, titled Kindness,  which I’ve put a part of below:

…Before you know kindness as the deepest thing inside,
you must know sorrow as the other deepest thing.
You must wake up with sorrow.
You must speak to it till your voice
catches the thread of all sorrows
and you see the size of the cloth.

If I’m remembering the context in which it was written, she and her husband (along with everyone on their bus) had been robbed, and one person lost their life, and while they decided that she would sit alone in the middle of a city plaza while he hitched to another city, to find out about not having passports and luggage or anything, a man came up and showed them kindness. (if you would like, here’s a thing she wrote about happiness).

sometimes we need no more reason to read poetry than that. But also, remember those times you sat in English class; and sometimes if you were like me you failed all the essays, and then the teacher told you to write another, and you were very bad at it and also couldn’t turn anything in on time? Mostly that last part.

One of the points of her interview was that you don’t have to be good at writing. You are living in poetry.  Sometimes we write it down, but you are already thinking all the time, and if you leave space to listen you can hear it. “…When you’re in a very quiet place, when you’re remembering, when you’re savoring an image, when you’re allowing your mind calmly to leap from one thought to another, that’s a poem.”

A student in Japan wrote her a note about the concept of yutori (ゆとり) as “living with spaciousness.” This is something we find in poetry, but it is everywhere, too. It is there when we look at things.

It’s not just the color or lines in a piece that makes it art, but so much also the space in between.

It is taking time in small things. Whether you do them fast, or you do them slowly, there are tiny moments in both that you can hold, and say things like, “ah huzzah this coffee is delightful,” or, “here I am with this person how nice,” or maybe if you are me, things like, “TINY WATER DRAGON WOW WOW WOW,” and then there you are. Poetry.

This is how we hike- not only with great and wonderful imaginings- but mostly with the small moments in between things. It is so. Also snickers bars. Every time I eat food, I am stuffing my face in the middle of art. Ver good.

Anyways, I am off to the Dakotas tomorrow, so I may write you some things from there that I found in New Jersey, which was as rocky as Pennsylvania but with much more moss, pools, and people. Also we were not as cold. Like… Did not freeze every time we stopped hiking. Huh… That’s why we got where we were going so fast. Freezing. ❤ YAY

My people, it’s been real. Until I write again, keep going in the spirit of the New York trail, which goes something like hiking in northern Virginia. What I mean by that is, if you find a granite rock or a small craggy hill and the way around it looks nice, and level, and mossy and you know in your heart that you could just walk around this rock or small craggy hill surrounded by verdant green things and flowers and glorious sunshine and get to where you are going……

CLIMB OVER THE ROCK. ASCEND THE SMALL CRAGGY HILL AMIDST ROCKS AND DUST AND PAIN, YOU HAPLESS HIKER, YOU.

I am perhaps too delighted by this. CannotwaitforMaine.