Um… What was I doing the last time I wrote you? Hold on… OH. I HAD BRONCHITIS and was still in Maine. 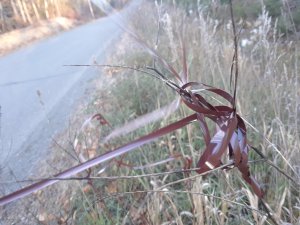 A formerly common specimen, Assetcay Apetay can occasionally be found in the forest or growing wild by the roadsides.

Now only one of those things is true. I will let you guess which one. Think about the fact that I’ve been sauntering through Maine for about 2 1/2 months…. 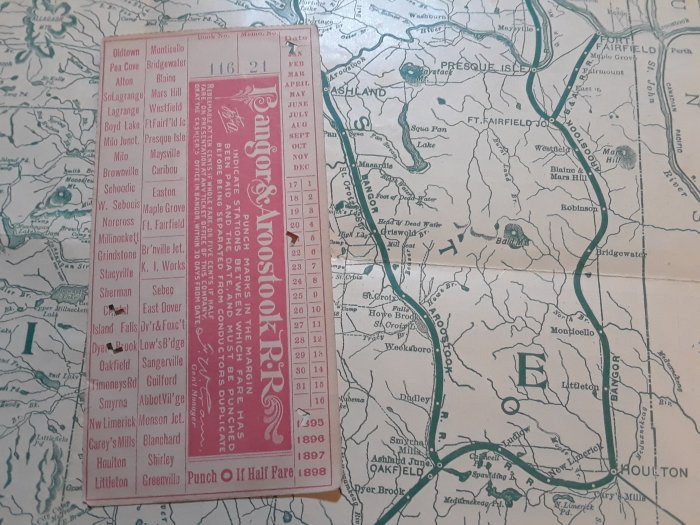 Here is an old rail ticket, and a map and train schedule from 1907. It belonged to a man who worked the logging runs up here, and kept a journal in which he wrote notes in purple pencil. Part of the IAT through this area runs on the old railbed.

Yes, alright. Still in Maine. Give it enough time, and I’ll be like that rail ticket. Faded. Holey. No teeth. In Maine.

You wish you could be up here. Best potatoes I’ve ever eaten, here in Aroostook county. Not even working on Ireland farms* have I eaten such potatoes. 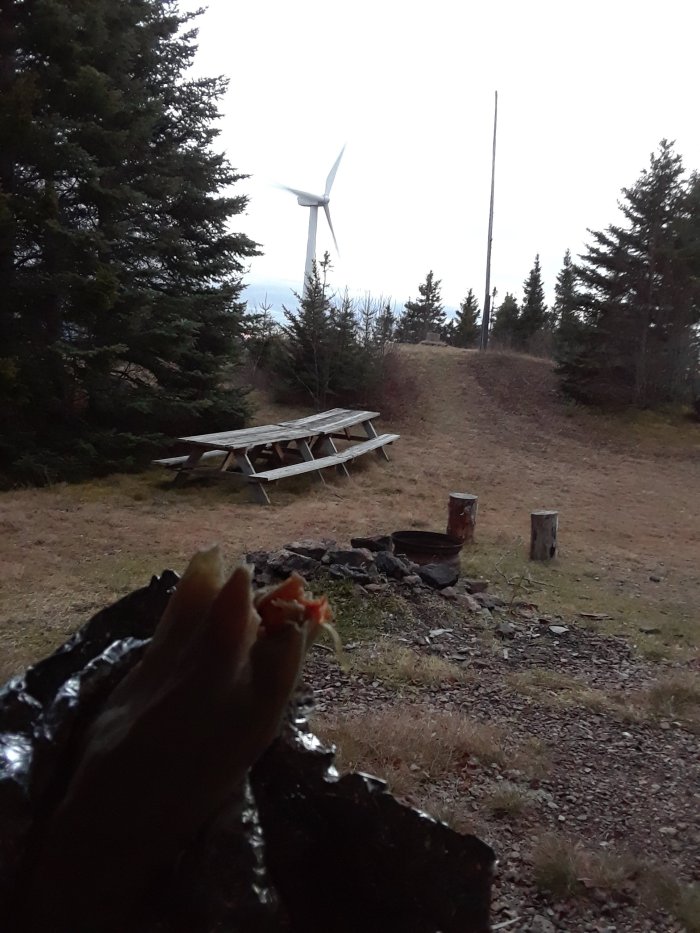 Not potatoes. Is wind turbines. This photo is on Mars Hill, which pokes up out of the land around it like a strange lump. The rock it is made of is a silicate-based conglomerate (many wee rocks stuck together), which is very hard and durable. It has eroded slowly; the land around is made of softer rock, which erodes away faster. Hence- Mars Hill. Land lump.

Shortly after I was telling you about bronchitis, I got back on the trails and wandered north, then got picked up by Bill Duffy and a whole contingent of Mainers, who were on their way up to New Brunswick for the annual meeting of the North American chapters of the IAT.

Creepin’. This is in New Brunswick. The people who run this meeting place offered a job playing piano for their events, but I said, “Not yet, I’m not here yet,” and went back south. You can see members from all the chapters here (except for the New Brunswick chapter. Sorry, Poul).

so a great partnership was formed, and away we went northwards. There was much discussion. Good food. Huzzah. I am not going to do it justice, but it was incredible getting to watch the minds who have put this trail together just… work. It’s a heck of a lot of work, let me tell you.

A bridge along the old rail line.

One of the things that will be relevant for you, next year, is that the Maine/NewBrunswick/Quebec(?) sections of trail will be available on Guthooks, our friendly neighborhood trail app. (The Maine section is very flat compared to the AT, and would be a fun way to get from the Canadian border to the Katahdin area. Eating all the BEST potatoes. Only 100-something-odd miles, guyyyyyssss)

Then, after a weekend of connecting, discussing, and giving Sail foods, we rode back down the NB trail; and good Bill Duffy dropped me off in the woods; and I walked to the border.

This is a Coke.

I have walked 2700 miles, over hill and countryside, to the US border.

All the border patrol did was circle me with a helicopter a couple times, apologize for disturbing me at the IAT border shelter I stayed at, and wave happily as I walked along the road and waved at them; then US Customs bought me a coke as congratulations for walking successfully from the deep South to the border crossing at Fort Fairfield, and we sat and laughed and talked about beautiful country.

It is only that:

All I could think about, in the seven miles I was trudging over hills and around bog, along the border trail, was the migrants further south who are also walking north, to the US border.

On this walk, I’ve had folks come up and tell me I’m incredibly brave. And I was walking those last seven miles, and thinking about the fact that every step I have walked north to this border, I freely decided to walk. Without fear.

I have other options that don’t involve letting my family starve, or living afraid of violence; and I usually don’t mind being a vagrant. And y’all often come up and are like, “What you’re doing is very hard. It is incredible that you have done this.” Y’all… If you think I’m “courageous,” take a look at these folks.

Here is a border marker.

Only, instead of a Coke, our administration plans to greet our caravan of uninvited neighbors with guns and barbed wire.

As a former teacher- if my students are watching me resolve a conflict, I’d rather have them watch me struggle to be a better person, than take the easy way out. Violencing people because we’re afraid is easy; it takes creativity and courage to think of ways not to, but it is also important that we try. Ugh, being human.

I don’t know how to resolve this in a way that respects and cares for all the people involved. All I’m really doing is walking my own trail all up in here, and being sad.

Whahaha actually, right now, I’m staying with a random couple (Amanda and Patrick), who have seventeen children and have named them all in alphabetical order. Someday, if I love you enough, I’ll tell you all their names.

One of them is Raphaelettina.

I guess what I’m actually saying is- I wish we would meet migrants with bread, and not guns.

*This is totally irrelevant to the current hike, folks, and only related to that Ireland asterisk… but if you wanted to travel and/or work on farms, and don’t have a lot of money, check out WWOOF (Worldwide Organization of Organic Farms). You work and get to travel. They get your hard labor and give you room and board. Very good for humans with limited resources.

Also, if you’re looking to get into outdoor jobs at an intro/ young person level, check out the Student Conservation Association.

P.P.S. Also, I totally lied to you. They only have one child, and her name is Zoey. That’s, like, reverse alphabetical order but really I was just making up stories to make life more interesting. Whoops.

7 thoughts on “Well, alright, here is a blog post”