This trek is registered with HIKE for Mental Health, an organization that works to help stamp out the stigma of mental illness and conserve wilderness trails. To learn more visit: https://www.hikeformentalhealth.org/hikers/hike-for-mental-health-iat/.

Hundreds of millions of years ago, before the formation of the North Atlantic Ocean, the Central Pangean Mountains dominated their supercontinent, forming a range probably around the height of the Alps, and longer than that of our modern-day Himalayas. The dynamics of their initial formation were the likely cause of an ice age that wiped out nearly two-thirds of the species on earth at the time.

Since the formation of the Atlantic, vastly eroded pieces of this old mountain range lie scattered about, from the Appalachians of North America, through parts of the Arctic circle, across the Caledonides of northwestern Europe, and down through the Iberian Peninsula to the Anti-Atlas Mountains of north Africa. 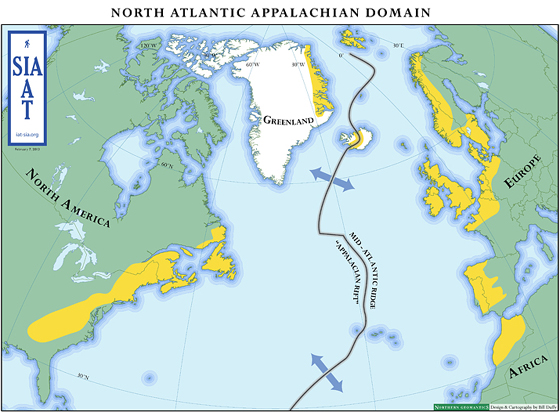 The International Appalachian Trail (IAT/SIA) is an international network of trails that runs through the old Appalachian terranes, first proposed in 1994 to join together the highest points of Maine, New Brunswick, and Quebec, and now extended further across the Atlantic. The current plan is to walk (slowly) thousands of miles, from Flagg Mountain in Alabama, up through the Canadian Maritimes, travel across islands in the Arctic Circle, and hike down through western Europe to where the trail network ends in Morocco, completing the IAT as it is currently established, sailing or flying as necessary to get across oceans. In areas where the IAT has not yet been established, other trails will be walked.

The journey began in June 2017, at Flagg Mountain, Alabama. At around 3800 miles in, this blog is the only present documentation, apart from personal journals and photographs.

The Appalachians in the fall, from Deasey Mountain, Maine.

Sail worked through senior year of university as an EMT-B, completed majors in physics and Arabic, then interned as a backcountry ranger in Yosemite National Park after graduation. There, Sail was introduced to trad climbing, gained a season’s worth of experience in SAR, and lost all shreds of respectability. Since then, work experience extends through jobs on ships and farms, social work, and teaching high school physics, engineering, and botany near the Black Hills of South Dakota.